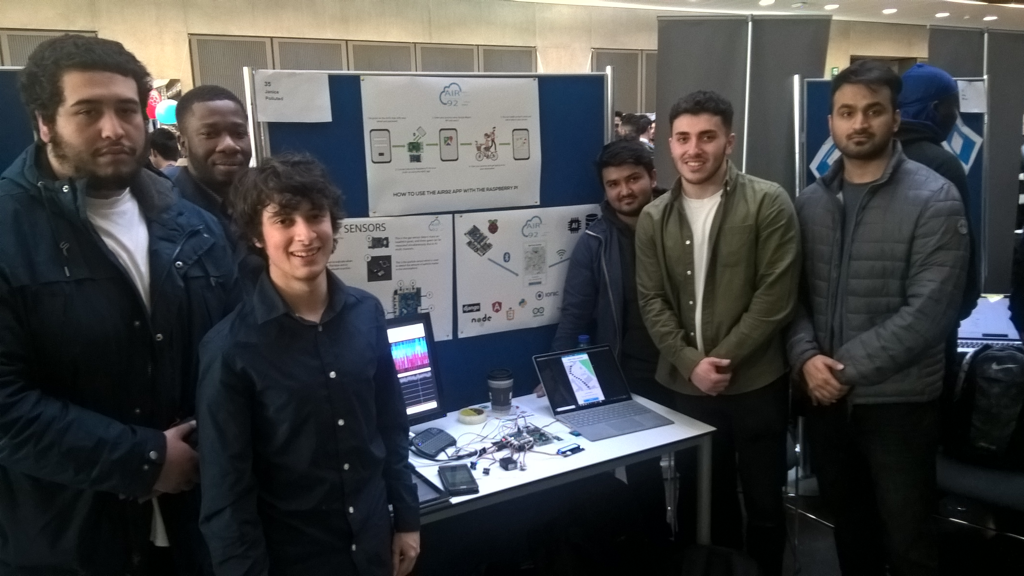 First of all, where did the team name come from?

After a lot of cringe-worthy name ideas and after doing some research we found a stat on Google that was “92% of the air you breathe is polluted”, and so we came up with Air92.

Briefly tell us a bit about the project you chose, why you chose it and what you produced as a result?

The brief asked for us to utilise a Raspberry Pi and some sensors to gather pollution data and a mobile app that would work with that to track and store the data gathered. In the end we produced pretty much what was asked for.

A lot of the other briefs were all really similar and all wanted us to produce a webpage or something like that, which we have already done. We wanted something that was a bit different as well as challenging. We found the idea of working with a Raspberry Pi interesting and although some of us have used them before we have not done something this in-depth before.

Do you think the Professional Development unit as a whole has been helpful and if so, how?

The group project was the most helpful part of the unit. There were some interesting lectures like the one about Restlet, we didn’t know that those quick services existed.

What did you think about the project?

It felt longer than 6 months. At the start we actually felt kind of out of our depth, however in this project alone, in the 6 months, we’ve learnt more in this than in any other module.
Before in any project we were doing by ourselves, we would just jump straight into development, but after doing this project we can see how the planning phases actually help, we can see the benefit.

What did you think about the workshops DigitalLabs held?

The projects kept us in line, to be honest. It was good to be able to sit down all together and be able to get any help that was needed. We loved the pizza as well. It would be good if those workshop periods were more implemented into our uni-hours, because they were very good. What did you think about the way in which we helped set up your project?

If you left us to it, I dread to think what the Trello boards would have looked like, I think it was consistent and organised in the format we followed. If we didn’t follow that system we probably would have dived in straight away without going through the design phases and wireframes. The project structure was really well organised and we would use it again, the design board especially was really useful when we got to the implementation stage.
We really liked how Trello was flexible so we could use it to our advantage, it was good to be able to go back to and keep us on track when we were focusing on implementation. It was nice to be able to show what work we had achieved and enabled us to work collaboratively easily.

What were the biggest successes?

Getting the bluetooth connectivity between our app and the Raspberry Pi was the biggest achievement, it took real persistence. Another thing was that we found out that the particle sensor we had was built for Arduino, so we had to convert the C code into Python to be able to use it, and that was the first time we just used pure research and knowledge to solve something instead of following a guide.

How did you communicate as a group?

Fortunately, we’re all in the same classes so we met up after lectures. We had a group chat on Whatsapp as well. And we held a lot of group meetings and documented them on Trello.

How did you task out the work?

We just delegated tasks to our team members, and if it wasn’t getting done then maybe sometimes we would move it onto someone else.

What are the biggest takeaways from this project?

The main takeaway was gaining the experience from going from a project brief to producing something that works, going through that whole process was really useful. The whole project template can be used for other projects as well, and that’s really valuable.
We also realised how persistent we needed to be able to get past issues, even seeing other team members persisting and overcoming issues actually taught us all a lot.
Learning how to use, and the benefits of GitHub as well is really good and also now being able to to quickly build cross platform app prototypes is also really useful.

What piece of advice would you like us to pass on to the next year group?

The advice we would give to the next group is that you might not have as much time to develop the app as you might think so manage your time wisely!