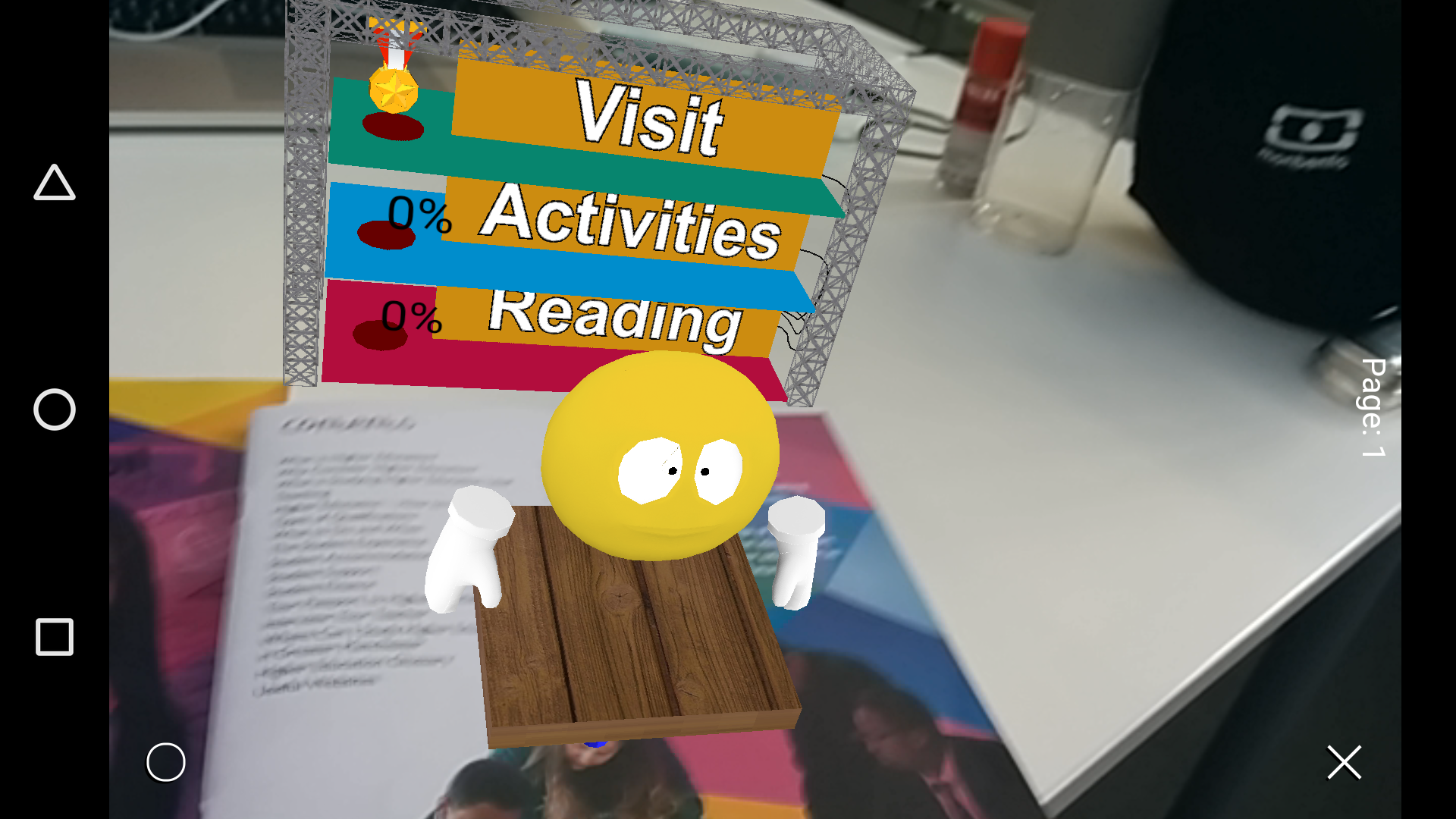 One of the ways they do this is by distributing a beautifully produced and comprehensive booklet.

As kids, when we were given booklets, they’d be defaced, be left on buses, and lost – and these were the lucky ones. We decided to make the book a thing of magic and intrigue, by digitally enhancing, not by creating a digital, app-based version, but by building another layer of value and interest on top of the booklet itself. We created a character ( Emoji) that guides you through the book, rewards your engagement with the challenges in it, and encourages you to explore institutions in the flesh, using sound, 3d animation, and an interactive framework that triggers these sequences when a page from the book is shown to the application.
Try it out – you can find a version of the booklet here, and you can download the app to both Android and Apple phones and tablets.

How did we make it?

We decided to create a 3d character as a guide for the user of the booklet, who could speak to you about the different pages in the booklet by looking through your phone at it – an Augmented Reality (AR) experience.

This was a large undertaking – we would need to storyboard and design for each page in the booklet, and create 3d models, character rigging, and animations for each. We’d also need sounds, and a way of building our own 3d user interaction and event manager, as it’s still early days for AR interaction.

We went with the Wikitude AR system, as it provided a cross-platform and rapid development environment.

What were the design concerns?

There’s a few issues we had to address, around deployment costs, privacy, and management. By taking these on as core concerns, they never became a problem.

Deployment costs were critical. We did not want to have to reprint the existing booklet or cause a need for it to change; equally, there was neither will nor budget to provide increased server infrastructure, either to log usage data or deliver assets. We were also keen not to increase GMH’s exposure to liability or responsibility; we achieved this by keeping the data on-device and not allowing it to be transmitted online or exposed to anyone other than the device owner. This had the benefit of not causing GMH any extra work in terms of notifying data protection authorities and eliminating any potential liabilities or costs involved with data hosting.

MMU has a fierce design and animation school, and we recruited a number of animation and design students to work on the project through the Jobs4Student programme. George fleshed out the ideas into storyboards, and designed the characters. Federico built the animation rigging for the main characters to allow fine-grained control, whilst Phil came in to work with Fred to produce the final animations and help break down the sequences into repeatable elements.

While the students developed the animations, the rest of Digital Labs set about building the infrastructure to handle it. Building the software is always a fairly easy challenge, particularly when compared to managing complex toolkits beyond your control and releasing software to platforms with quite different demands.

One of the final challenges we had before release was dealing with an application containing large amounts of data; while Apple allows very large applications to be hosted on the App Store, Google has limits. We had to refactor the whole application data management system to handle an Android limitation at the last minute, whilst still keeping the application cross-platform and not affecting the Apple version.

What came out of it? Our earliest versions had us develop a flexible, data-driven animation scripting system, allowing decision-making in the animation and display system, whilst keeping sound and animations in sync, regardless of device performance and capabilities. We could tap and interact with things in the virtual world, which – even as a developer and understanding the system – could still be confusing and lead to embarrassing moments in the studio of realising you were mistakenly tapping things mid-air that were not there.

We built our own tools to generate the datasets we’d need to position buttons and interactive elements. This was produced in days in MaxMSP, saving extensive manual labour; there was a nice crossover of JavaScript powering both the data generation and the runtime engine of the on-device scripting system we had built.

GM Higher got an extensible system that encouraged people to hang on to their booklets, look after them, and try to explore all the activities and locations mentioned in them. Had no extra work to do; the whole experience was retrofitted onto the existing booklet without needing any changes.

Free iOS and Android applications are available to support anyone with a copy of the booklet, or the PDF version available online

We developed a state-of-the-art interactive AR animation and interaction system, as well as tools to support programming it. As a team, both ourselves and our interns developed a concrete, deployment-based understanding of the challenges (and possible solutions) to modelling, animating and scriptwriting for 360° Augmented Reality views. We developed an understanding not only of how to deploy Applications to the App and Play store, but how to get around the size limitations and knock-on impact this can cause. We also filed a number of very obscure bug reports to commercial technology providers – the trophy for pushing technology envelopes.

Students got to develop real-world runtime animation systems, pushing their technical abilities to work within a more constrained and limited environment than they were used to – but they also got to think about the issues of working with 360° environments and the still-nascent world of Augmented Reality work – like moving from a traditional theatre to Shakespeare’s Globe, demanding the stage managers consider usage from a wide range of angles and orientations.